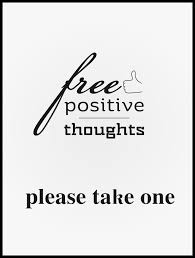 I have a side hobby, a geeky one so I will keep it a secret for now.   But, I often wonder if being positive plays a part in it.  Take today for example, woke up knowing I was spending the morning doing my hobby and had a feeling something good would happen.  It stuck with me, and it’s happened before.

It happened again, hobby produced something great.   It’s amazing yes, but how do I put this to winning money to clear some of the this debt!  Or..perhaps it doesn’t work that way?  I have read ‘The Secret’ , learnt about the influence of the universe etc and it only seems to work in some situations.

Stay with me, I am not some oddball who believes in the stars and/or magic.  I wonder if positivity only works for something you haven’t caused yourself?  deliberately or by error.   Perhaps the point of life is to push you along but not bail you out, but something will have to.

My positive thoughts on the debt are mostly hopes and dreams!  As in, lottery win / inheritance / find buried treasure!   The important thing is to stay as positive as you can, apparently it can attract good fortune.  Well my smile has been pasted on for so long now it needs renewing!   Smiling through an affair, divorce and mountainous debt is some acting let me tell you.

But it has to end sometime, I firmly believe that and that, in itself, is a positive thought!

3 thoughts on “positivity or premonition?”

How did I end up in this mess?